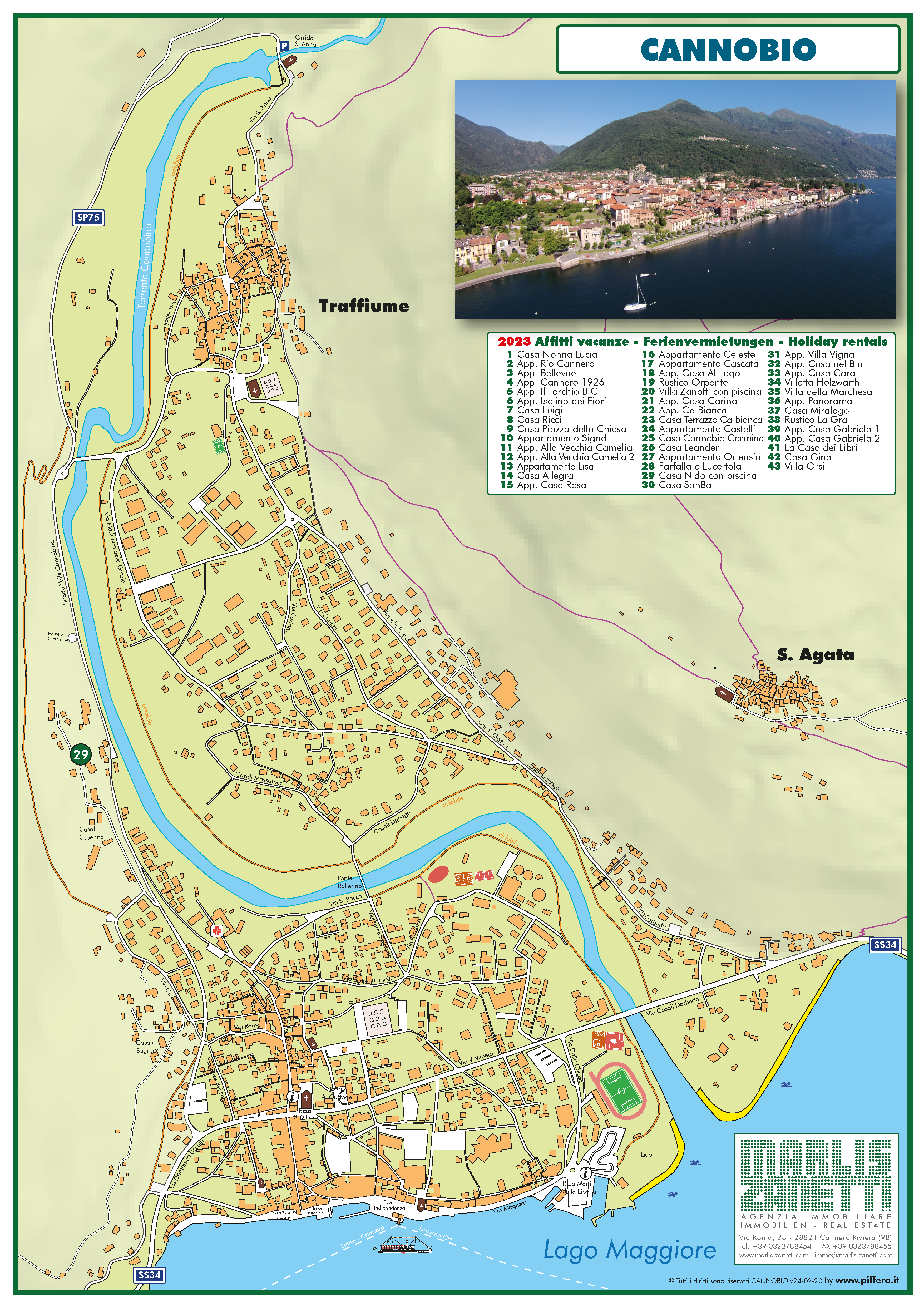 The medieval town of Cannobio

lies directly on Lago Maggiore on the delta of the river Canobino. Cannobio, on the Piemontese side of the lake shore, is the first Italian village on the travel route which connects northern Europe over the St. Gotthard and the St. Bernadino passes with southern Europe. “Frontier country” – not only in geographical sense – between Piemont, Lombardy and Tessin, who have marked its history and development and created ample environmental and human influences.

It is documented by historians as ancient, flourishing village thanks to his intensive commerce, which existed even before the thousand year turn. In those times the economy was based on the craftsmanship, the agriculture and particularly its exchange of goods, who was practiced prevalently on the water way.

Cannobio is a picturesque town with many alleys, flight of stairs and arcades which lead to the lungolago; the wide, in 2004/05 newly styled promenade with its patrician houses from the 16th and 17th century turn the stay near the water into an event. Under the arcades of the promenade one finds an abundance of coffee houses, bars and restaurants with Italian food and specialties.

Every Sunday morning the promenade turns into a typical Italian open market, which attracts visitors from far away. The vast offering ranges from vegetables, fruits, cheeses, sausages, household goods, leather goods, clothes to shoes and much more.

The beach area of Cannobio is one of the largest on the Lago Maggiore and the only one who possesses since 2001 the European award of the “Blue Banner “. One finds a surf-, kite- and sailing school and the rental for a wide range of equipment for sailing, scuba diving, angling, water skiing and canoeing. The bath in the river mouth is an especially refreshing enjoyment. Tennis courts, a mini golf court, bicycle trails and the soccer stadium complement the recreation possibilities.

In the close vicinity the romantic Valle Canobina with its deep gorged river and its many mountain hamlets invites you to hiking, bicycle and motorbike tours. The narrow and curvy stretch, connection to the Vigezzo and Centovalli valleys, holds for two wheel bikers a special challenge. It is worthwhile: magnificent views into the deep gorge and the wild mountain landscape.

Every year, on January 7th, the town centre is illuminated by thousands of candle lights on window sills, balconies, in the alleys -even in the niches of the campanile walls-, on the boats and especially along the way of the traditional procession of the relic “Sacra Costa” (who reminds about a miracle in 1522) from the basilica San Vittore to the Santuario della Pietà on the lake shore.

During the whole year – but especially during the season – expositions, antiquity markets, parties, concerts and other celebrations are being held, which offer for everybody something of interest.